The historical regulatory framework of CO2 standards for light commercial vehicles has led to reduced CO2 emissions from the transport sector. In fact, the 2015 and 2017 targets set for passenger cars and vans, respectively, were reached in 2013.

However there remains much more headway to be made, given that light commercial vehicles account for 15% of CO2 emissions in the EU. In order for the EU to reach its goal of 55% net emissions reduction by 2050, the most recent legislation, adopted on January 1, 2020, must sustain the effectiveness of previous legislation.

The following article first outlines the precedent for CO2 standards for passenger cars and vans (‘light commercial vehicles’) in the EU, then moving to analyse the current standard and its policy implications.

A History Of Emission Standards For Passenger Cars And Vans

In 2009, a regulation (Regulation (EC) No 443/2009) for emissions performance standards for passenger cars was established in an effort to reach emissions reduction targets in the EU’s second largest emitting sector: road transport [1]. This regulation was in effect from June  8, 2009 until December 31, 2019. The origins of the standard can be found in the EU’s 1995 strategy to reduce CO2 emissions, mainly through fiscal incentives [2].

The regulation was built on the well-established process of measuring CO2 emissions of new vehicles (a scheme established on June 22, 2000) and forms the basis of the official legislation, adopted by the European Parliament in 2011 [1]. In comparison to the original 2009 legislative proposal, the 2011 legislation, which was complementary to that of 2009, was directed at light-commercial vehicles, or vans, and had a less ambitious long-term emissions target [3].

The emissions reduction potential created by the 2009 regulation is evident, as shown in Figure 1, which provides a 2019 representation of the average historical CO2 emission values and adopted CO2 standards (targets) for new passenger cars in the EU. As shown in Figure 1, from 2009 to 2015, CO2 emissions were reduced from ~150 g/km to ~120 g/km which increased from the period between 2000 and 2009 where emissions were reduced from approximately 170 g/km to 150 g/km. 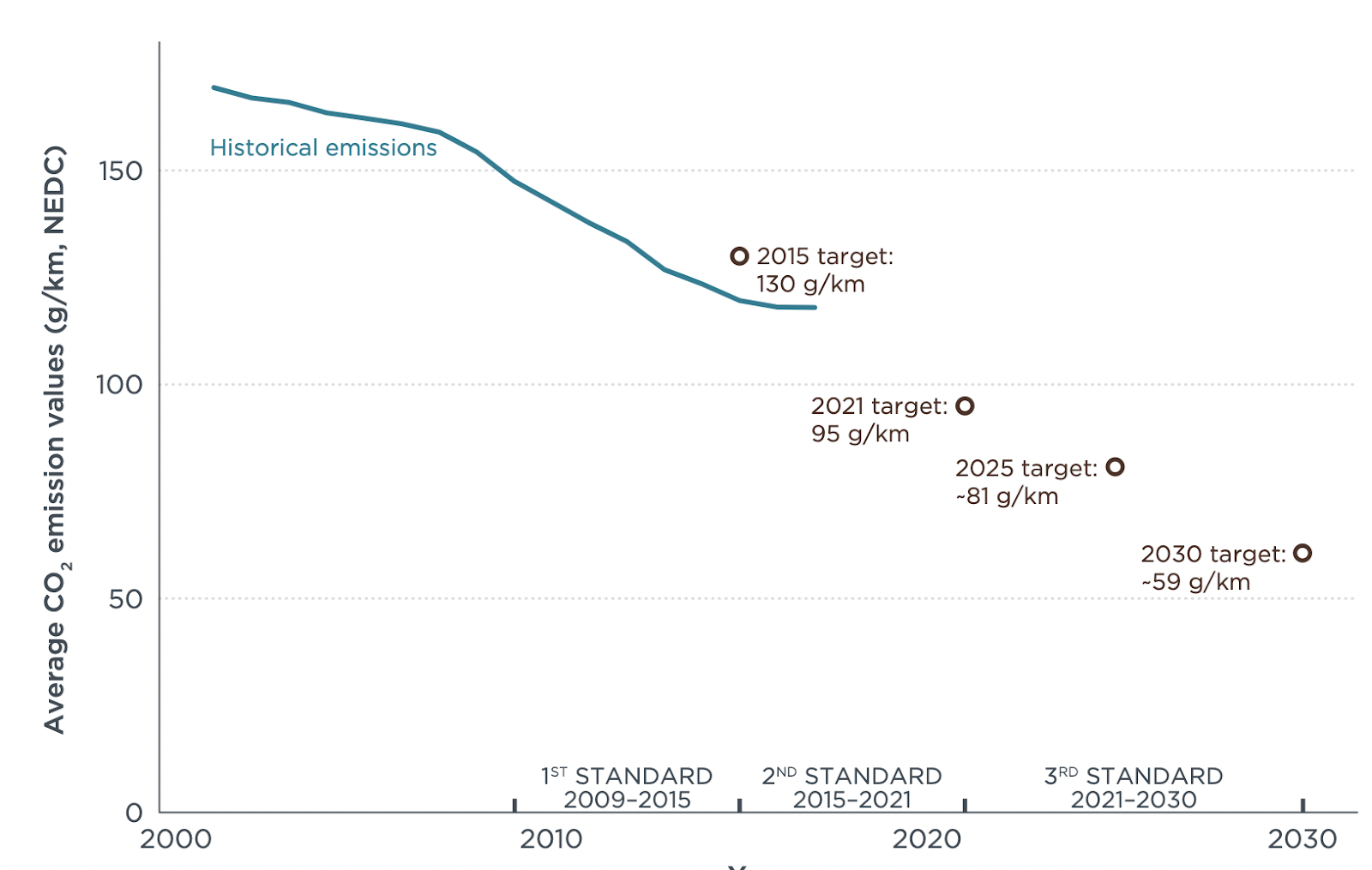 The influence of the 2009 regulation on emissions reduction for vans was lower than on passenger cars as shown in Figure 2, which provides a 2019 representation of the average historical CO2 emission values and adopted CO2 standards for new vans in the EU. 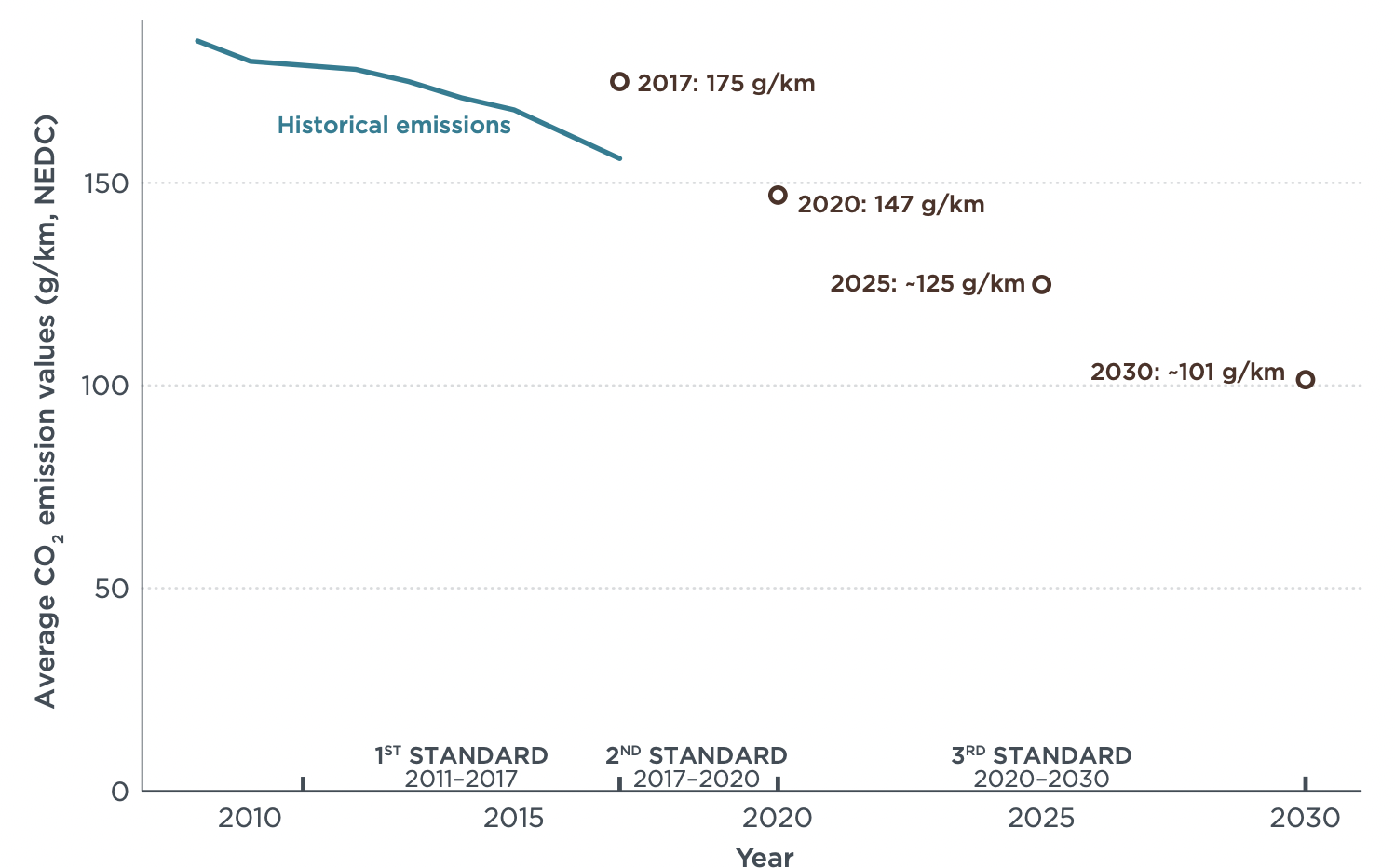 What Is The Current Standard Set Out In The 2019 Proposal?

Given the success of the previous legislation, what standard does the 2019 proposal, adopted on January 1st, 2020, put forward that was lacking in prior regulations?

The principle change is that the new regulation (Regulation (EU) 2019/631) forms part of the EU’s wider commitments under the Paris Agreement [6]. These legislative proposals include a minimum 55% net reduction in greenhouse gas emissions by 2030.

The benefit for the manufacturer, in turn, is that they can continue to produce high emitting cars (which have higher ROI) while still maintaining the maximum CO2 emissions average. This system applies to passenger cars with emissions less than 50g CO2/km.

Perhaps where the greatest progress has been made is with regards to penalties. In the 2011 legislation manufacturers were required to pay an excess emission premium of €5 for the first g/km of excess emissions, whereas in the most recent 2019 regulation, this penalty increases to €95 g/km.

However, a limitation to these improvements is that not only does the data provided by car makers not accurately represent real-world CO2 emissions as they are measured in a laboratory, but also may manufacturers falsify the conformity of their vehicles to the emissions standard. The EU’s response to these barriers is the Type Approval Framework Regulation [6].This regulation enforces a process whereby an EU Member State verifies that a vehicle conforms to the administrative and technical requirements established by the CO2 emissions standard [6].

Initially, until 2019, South Korea and Japan’s targets were stronger than those of the EU. The EU’s 2021 enacted target, which has now been postponed until 2024,  is on par with those of the US and Canada.

The implications for emissions reduction

As evidenced in this article, the previous CO2 emissions regulations for passenger cars and vans has proven effective — emissions saw a steady decrease between 2008 and 2014 [8].

However, since then, emissions in the transport sector have seen a steady increase (apart from a temporary decrease due to decreased mobility due to COVID-19) and projections are not optimistic, even with the most recent regulation.

Therefore, the planned additional measures to reduce the production and use of high emissions vehicles must be implemented, if the EU wants to reach a 55% net reduction in CO2 emissions [8].

The mining of transition materials, crucial to the production of EVs, echoes many concerns of

Transportation often gets identified as a major vector for emissions, and is therefore the target