One direct driver that influences the marine ecosystem’s functioning is biodiversity (or variability between species and ecosystems). It is therefore vital to understand its role in climate change and climate mitigation.

It should be noted that this article will explore nature-based solutions to climate change, rather than those requiring deliberate intervention such as geoengineering. This is because these tend to better factor in the socio-economic benefits of climate policies, rendering them localised and resource-efficient [3].

The following sections of the article will discuss in further detail the role of marine biodiversity in climate mitigation and will briefly outline its implications for strengthening climate resilience.

It is estimated that oceans absorb approximately one-third of the total atmospheric carbon, pointing to their beneficial carbon storage capacity. Oceans are therefore  the largest carbon sink ahead of the atmosphere and the soil. This fact has led to many proposals for carbon dioxide removal (CDR) projects, a form of marine geoengineering. These aim to deliberately manipulate the natural ecosystem to remove atmospheric carbon dioxide (CO2), counteracting climate change [4].

However, the paradox is that the more CO2 absorbed by the oceans, the lower its ability becomes to absorb CO2, effectively reducing the climate change mitigation potential of the global oceans. Furthermore,  over-reliance on the carbon storage capacity of the oceans threatens to compromise its ability to provide vital ecosystem services such as food coastal protection from natural disasters to poor island nations [5].

On that premise, the major impacts of climate change on marine biodiversity are two-fold:

Ocean acidification (OA) refers to the decreasing pH levels, or increasing acidity, of the oceans due to the seawater’s absorption of CO2. This is measured by a decrease in carbonate, which is considered a crucial building block of the oceans.This is because calcifying organisms rely on calcium and carbonate to form their shells, including marine plants and animals such as coral, some plankton species and shellfish

There are also socio-economic consequences of ocean acidification, including loss of food and job security, given that over three billion people (most of whom come from developing countries) depend on marine biodiversity for their survival [5].

The rise in sea surface temperature is another critical climate change indicator and affects marine ecosystems in several ways. Firstly, temperature variations can determine the regional diversity of plants, animals and microbes, change migration and breeding patterns and threaten coral life [7]. The rising temperature is also cause for concern because it decreases the adaptive capacity of the marine organism, i.e. their  ability to respond to the changing environment to ensure survival. This process reduces biodiversity and ultimately lowers the ecosystem’s resilience [8]. A recent study from Stanford University found that historically, marine biodiversity suffered in times of extreme warming because the high temperatures make it difficult for cold-blooded marine life to breathe. Thus, increased temperatures prove even more consequential to disrupting marine biodiversity than ocean acidification [9].

Similarly to the adverse effects of ocean acidification, changes to nutrient supply leads to declines in fish populations and therefore have consequences for the

billions of people who rely on fish for their livelihoods [7].

The Ocean: The Largest Carbon Sink

While the adverse effects of climate change on marine biodiversity are more well-researched, less is understood about the ocean’s capacity to mitigate the impact of climate change. One of the ways in which it does this is by capturing and storing carbon, in what are  known as blue carbon ecosystems. The IPCC defines blue carbon as the “carbon captured by living organisms in coastal and marine ecosystems” [2]. 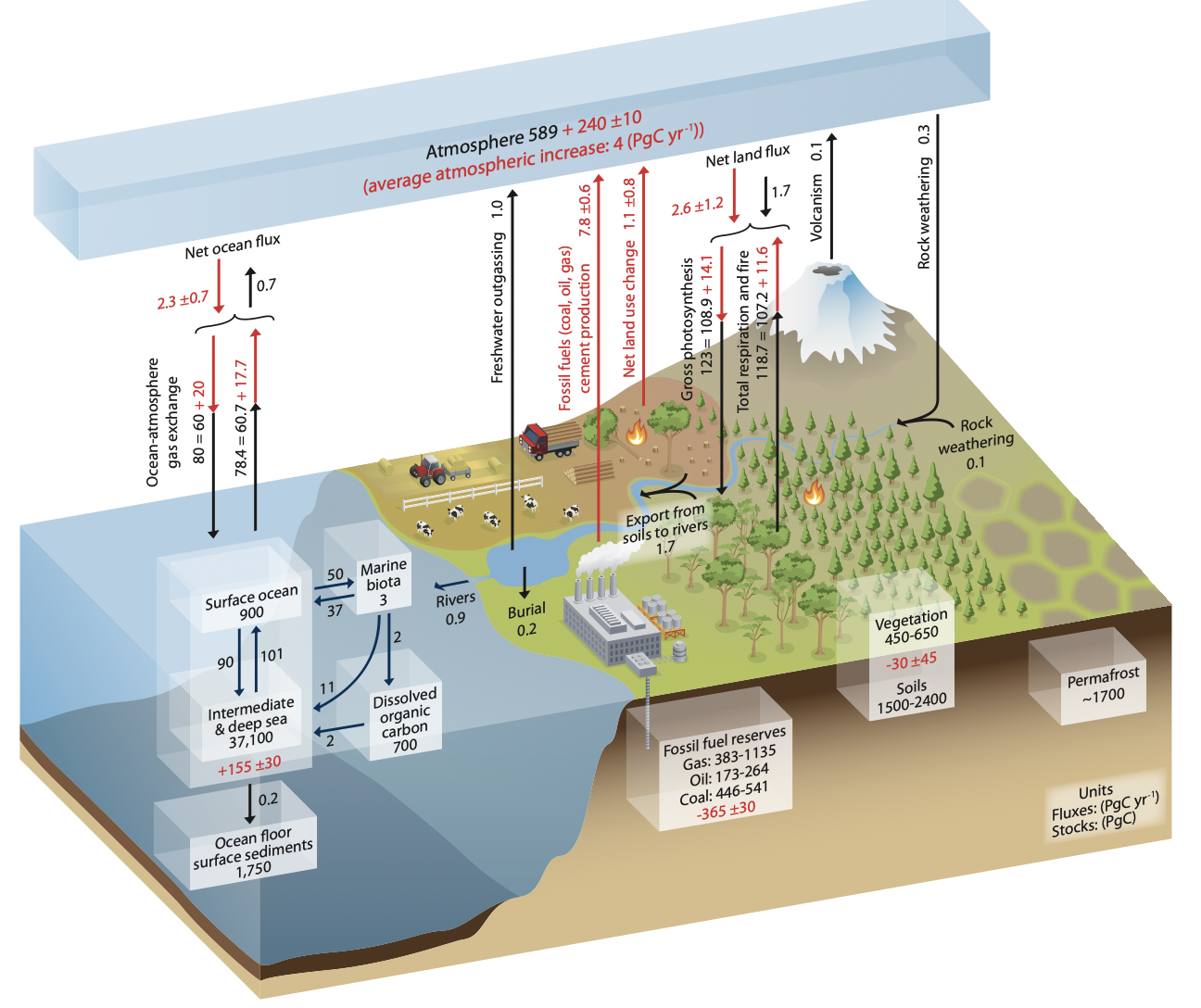 Figure 1. Simplified diagram of the global carbon cycle. Black numbers represent the ‘carbon stock’ or the amount of carbon stored in that particular pool [10].

As demonstrated in Figure 1, of the three largest carbon sinks – the ocean (intermediate and deep sea), forests (vegetation) and soils – twelve times more carbon is stored in oceans than in forests and soils combined; this difference is partly courtesy of marine biodiversity. It is thus incumbent on the EU Member States to take actions outlined in the EU Biodiversity Strategy 2030 to restore ecosystems actively [11].

Blue carbon isn’t necessary only because of its CDR potential. When these carbon stocks are degraded, they become sources of CO2  and methane, the latter being an even more harmful greenhouse gas than CO2. An added benefit of carbon sequestration in seawater is that it can stimulate photosynthesis and, in turn, remove carbon, thereby reducing ocean acidification [12].

The caveat of the benefits of the blue carbon ecosystem is that the maximum mitigation potential is not more than 2% of present-day emissions. This is therefore–as with all mitigation methods– not a replacement for the reduction of greenhouse gas emissions [13].

Nonetheless, strategies taking advantage of the carbon storage potential of coastal wetlands remain limited due to a lack of research or difficulties with monitoring and implementation. Despite these limitations, however, conservation of coastal ecosystems through Marine Protected Areas (MPAs) and implementing other regulatory policies are essential in protecting marine habitats and ensuring food and job security [15].

Phytoplankton also have carbon storage potential because a small fraction of their stored carbon sinks to the deep ocean floor for long-term storage. However, drawbacks to this approach include : phytoplankton are becoming less rich in biodiversity due to the decreasing oxygenation levels in the ocean; and, it is not effective without geoengineering, which as has been mentioned, is not the most reliable approach to climate mitigation [14].

The implications for climate mitigation

According to NASA, 2020 was the hottest year to date– an impressive feat, given that the ten hottest years on record have taken place in the last 15 years. It was also a year characterised by unprecedented wildfires and Atlantic hurricane season, with a hefty human and financial cost [16]. This increase in atmospheric temperature was also accompanied by unparalleled–but steadily growing– levels of global ocean warming on record.

As with all of the Earth’s carbon sinks, they can be used as a tool for climate mitigation rather than a source of CO2 emissions. As suggested in an article published for the World Bank, a broader blue economy approach can be adopted, characterised by the sustainable use of the ocean that simultaneously allows for economic growth and coastal ecosystem conservation [17].As part of this sustainable resource management approach, marine spatial planning provides an avenue to address coastal ecosystem degradation by restoring biodiversity in aquatic habitats such as seagrass and mangrove forests, and implementing nature-based solutions that include establishing protected fishing areas [17]. Overall, such restoration and conservation measures will also indirectly aid in climate mitigation by reducing ocean warming and, in turn, acidification,habitat and biodiversity loss.

As this article has suggested, the health of our oceans also has a direct impact on human health and well-being. Coastal habitats provide a wide range of ecosystem services: food security, jobs for low-income families, clean water and protection against erosion and extreme weather events [18]. Population distribution illustrates the sheer importance of coastal ecosystems. A UN article describes, “thirty-eight per cent of the global population lives within 100km of the coast…roughly 61% of the world’s GDP comes from the ocean” [18].

There remains much to be done regarding marine habitat restoration and conservation. Still, with the significant influence that it will have on intergenerational equity, particularly in developing countries, stakeholders must take regulatory action.

Photo by NOAA on Unsplash

In 2015, a seminal Lancet report suggested that “anthropogenic climate change threatens to undermine the