by Vincent Diringer and Amy Wilson

On top of commitments to reduce carbon emissions, a clean energy transition, and a net-zero future, one of the main tenets of the Conference of Parties (COP) climate conferences is adaptation. In the face of the climate crisis, adaptation refers to the ability nations have to react to, mitigate, and adjust to rising temperatures and its associated consequences [1]. Adaptation is a core component of the United Nations Framework Convention on Climate Change (UNFCCC) Article 4 on commitments [2].

However, unlike the time-dependent emission reduction targets, adaptation is an ongoing issue that needs to be continually addressed at different levels by global governments. From simple changes to urban planning to large-scale relocations, or the adoption of new technology or potential geoengineering programmes – adaptation takes many forms and requires the cooperation of stakeholders across a range of sectors [1]. 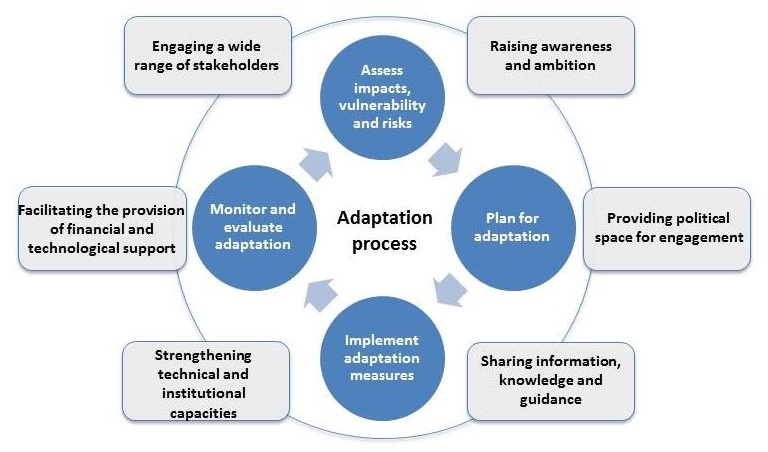 From: UNFCCC “What do adaptation to climate change and climate resilience mean?” [1]

Adaptation and the Intergovernmental Panel on Climate Change

To determine the best pathways towards continued adaptation, the Intergovernmental Panel on Climate Change (IPCC) provides scientific support as to how climate change is progressing and the best options available to decision makers. The IPCC continually issues new reports since their initial publication in 1990, with both the Assessment Reports (ARs) and Special Reports (SRs) forming the basis of current adaptation policy.  In addition to the IPCC’s reports, the UNFCCC also has an Adaptation Committee (AC) that helps identify relevant opportunities for countries to implement the best adaptation techniques available to them [3]. The IPCC’s reports and UNFCCC’s AC all work together to create a comprehensive outlook of adaptation and mitigation within the context of climate change and the implementation of the Paris Agreement.

The Paris Agreement and Adaptation

The Paris Agreement also highlights the importance of adaptation – the term features frequently throughout the agreement alongside mitigation. Article 7 of the agreement predominantly focuses on adaptation and establishing the global goal on enhancing adaptation capabilities and reducing vulnerabilities to climate change [4]. The Parties to the Convention further acknowledge the importance of international communication on adaptation matters, taking into consideration the needs of developing countries, and that adaptation approaches should be ‘country-driven, gender-responsive, participatory’, fully transparent and be guided by the science and knowledge of ‘indigenous peoples and local knowledge systems’ [4].

Furthermore, climate change adaptation is promoted through the Cancun Adaptation Framework created in 2011, as well as the Sustainable Development Goals and Sendai Framework established at the same time as the 2015 Paris Agreement [5]. All three aim to comprehensively build resilience across nations in a variety of ways. In certain countries like Fiji or Kiribati adaptation to climate change has been a fact of life for several decades, while in others in Europe or the United States, the effects have only become more palpable in recent years, leading to incremental calls for adaptation [6].

This is the case in countries like Fiji, which has seen an increase in climate change related migration as a result of more frequent, stronger tropical storms ravaging outer islands [7]. A similar story can be seen in Kiribati where locals have had to find ways of reducing the impact of rising sea levels across the low-lying atoll nation [8]. Adaptation to rising water scarcity is a key policy goal in Uzbekistan, while the European Union is working towards implementing adaptation into its rural and environmental planning [9, 10].

The variety in impacts caused by climate change make it a difficult topic to tackle in international policy – how does one plan to adapt for severe storm events in the Pacific as well as long-lasting droughts in Central Asia? This is why adaptation is an important part of climate policy. Within the context of the commitments made during the Conference of the Parties (COP) and specifically, COP26, mitigation and resilience-building will form the crux of their decision-making, and adaptation will be a core target [11]. The pathway to a sustainable future begins with having the best information available (such as the IPCC’s reports) and the support network to help act on that information (UNFCCC AC) – the only thing left after that is to act [12].

Capacity-building is the process by which an individual or organisation can obtain, improve or maintain

This article outlines the basics about climate change mitigation and current actions of international implementation.